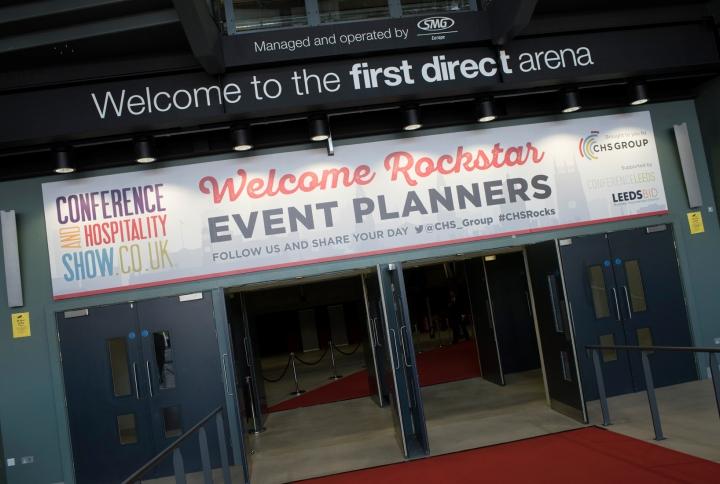 The Conference and Hospitality Show (CHS) has reported a 48 percent increase in visitor attendance for the 2016 show. Hosted buyers increased by 35 percent and the total attendance figure increased by 66 percent.

CHS, which is now in its seventh year, was held on 26th April at the first direct Arena, Leeds. The show is focused on bringing national and international venues and suppliers together to reach event buyers from the North of England.
Emma Cartmell, managing director, CHS Group said: “A year ago, I set the team some tough targets: to grow the number of visitors and exhibitors by 40 percent and I’m so proud to announce that they smashed it! The move to the Arena was a bold step but it has certainly paid off. The industry was very excited by the venue which meant that we sold out weeks before we opened. The Arena was really busy all day – and full of buyers conducting business, networking and learning.”

Over 1200 event industry professionals attended CHS which has grown beyond recognition since its humble beginnings at the Royal Armouries in 2009.

Jan Denning, commercial sales director, Wolverhampton Racecourse was a first time exhibitor: “The Conference & Hospitality Show really did rock! We were busy all day and received some great enquiries. It was great fun too – there was a really special atmosphere amongst exhibitors and visitors. I am keen to attend again next year, but with a larger space where several racecourses from Arena Racing & Leisure Group can be represented.”

Jan Perdu of Capita Travel and Events visited the show as a VIP visitor: “I liked the new venue and the larger variety of exhibitors; I book events mainly in Scotland and London and it was good to see so many London venues here. My day was really beneficial and I will certainly return next year.”

The Conference and Hospitality Show 2017 will be held on 4th April 2017 at the first direct Arena Leeds.