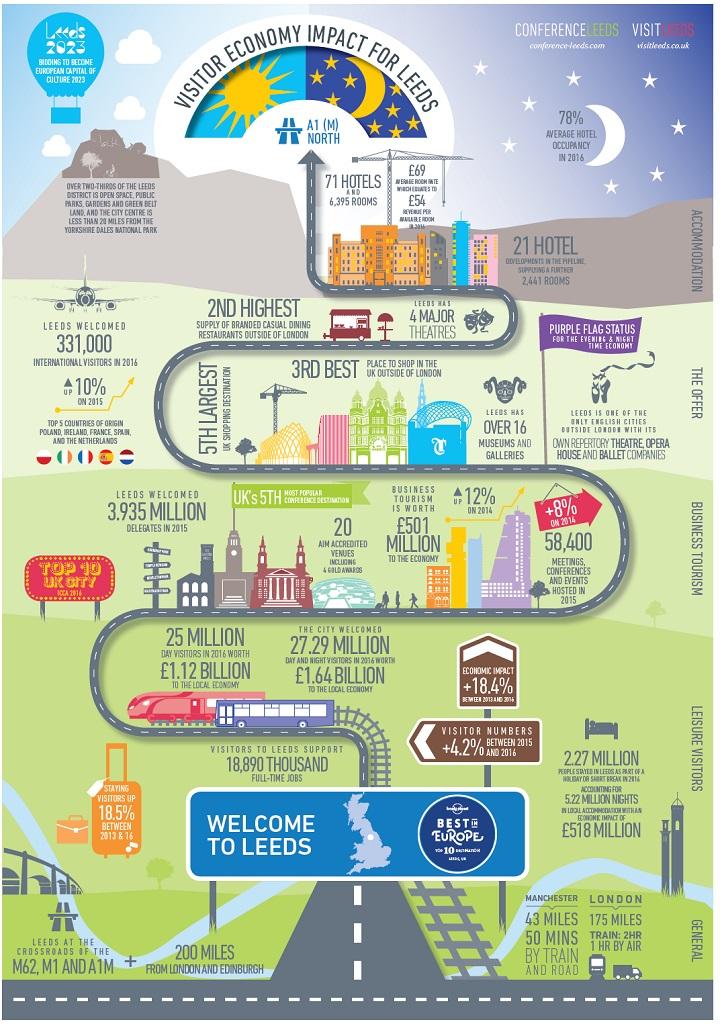 VisitLeeds have announced that data from the recent STEAM survey, which measures the economic impact of the tourism industry in the UK, recorded that Leeds welcomed 27.29 million tourism visits in 2016, a 4.2% increase from 2015. These figures support the overall upward trend for visitor numbers which has shown a notable 9.7% increase between 2013 and 2016.

As the city approaches the landmark of 100 days to go before the European Capital of Culture 2023 bid is submitted, the visitor economy sector is growing at an impressive rate with day visitors up by 4 % and overnight stays increasing by 5.4 %.

And it’s easy to see why Leeds is such a popular destination. The current report measures data from 2015 to 2016. And during that period the city hosted major world class events such as the Columbia Threadneedle World Triathlon Series in June where the Brownlee Brothers took Gold and Silver in front of their home crowd and Light Night a two evening arts and light festival in October which attracted record numbers.

Leeds has also enjoyed and shared the success of the opening of Victoria Gate, which holds the accolade of Best Shopping Centre in the World in October 2016 the newest premium shopping destination, home to 17 new brands to Leeds and for many this is their first time out of London. The opening of Victoria Gate means that Leeds currently ranks as the 3rd best place to shop in the UK.
Whilst also being home to a wealth of Museums and Galleries, an inspiring and vibrant cultural scene, sitting alongside strong heritage and history Leeds continues to flourish and has one of the fastest growing independent food and drink scenes in the UK.

VisitLeeds, working alongside other regional tourism partners, continues to deliver leisure campaigns both nationally and internationally including Christmas, food and drink, spring and summer campaigns, all aimed at attracting new visitors to the city to stay at least one night including a Friday or Saturday. It is the success of these campaigns together with an impressive programme of events that makes Leeds a destination of choice when planning a city break.

Business tourism also continues to thrive. Leeds climbed to be the 5th most popular conferencing destination in the UK and has recently celebrated success by improving its position in the International Convention and Congress Association (ICCA) rankings by 149 places, and is now in the top 10 cities in the UK, which sees Paris as the top destination in the world.

“We know Leeds is a welcoming city but these figures show the wider appeal to visitors coming for a leisure break or staying here on business. We have built up a fantastic reputation for hosting world class events that people come from far and wide to enjoy. Tourism like this has a significant impact on the Leeds economy, helping to create and sustain jobs for people who live here. And on the back of the recent Lonely Planet accolade which names Leeds as one of the top 10 cities to visit in 2017, we hope to build on this with the bid for the European Capital of Culture in 2023, to ensure the city remains one of the most sought after visitor destinations in the UK.”