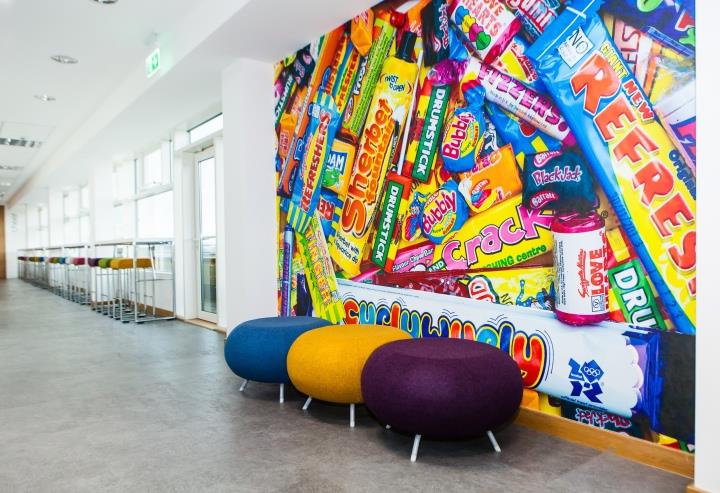 thestudioleeds has recently completed the expansion of its Riverside West home, adding 4 new state of the art event spaces and doubling its capacity. Works began in July and now thestudioleeds is excited to show off its new additions: Succeed, Mind, Matter, and Cheer.

Covering more than an extra 7,000 sq. ft. beneath their existing space, thestudioleeds’ expansion has brought with it sugar, spice and everything nice. As well as securing the sweet deal, the cherry on top for thestudio is that it will now be welcoming even more clients to experience its vibrant approach to meeting, training, and entertaining in the heart of the Yorkshire city.

Known for its fresh and colourful take on the typically monochrome world of hotels and business centres, thestudioleeds has not only received great feedback from its expansion works, but has also pick-and-mixed things up with two new feature walls which consists of – yes you guessed it – 21 types of sweets! The first of these quirky, confectionary-themed walls, features well-known sweet brands’ logos, which have been chopped and changed to spell out “Yorkshire”. With Kit-Kats, Party Rings, Jaffa Cakes, and Polos all making their cameo, this statement-piece is both a sweet-fiend’s dream and a fitting homage to the region. So taken with the theme were the staff they’ve added another wall of their favourite sweet treats and to celebrate the opening, the first 100 guests to book the new rooms each received a Curly Wurly chocolate bar.

Prior to the expansion works, thestudioleeds occupied one floor of Riverside West, decked out with everything natural. Complete with a living moss wall, a silver birch tree forest which stands adjacent to the walls, and a flock of sheep, the inside of the venue space reflected its panoramic views of the Yorkshire Penines outside.

“Our expansion has gone exceptionally well and we’re extremely excited that our capacity has increased as a result. Since opening almost two years ago, we’ve had more success than we had ever predicted in this incredible city and we’ve built up a loyal customer base. With only one floor we were restricted on numbers, so had found ourselves having to turn away these supportive customers, which was incredibly hard to do. Now, however, we’ll be able to welcome them back with open arms and deliver our award-winning service to them with rooms tailor made for their requirements.

The meeting and events space now covers the seventh and eighth floors, with a total of 11 rooms, which all offer a wide range of facilities including unlimited tea and coffee, free WIFI connection, award-winning meals cooked on-site with locally sourced ingredients, as well as fantastic links to transport situated in the centre of Leeds. The four additional rooms have all been fitted with state-of-the-art AV equipment, including integrated sound systems, Apple TV, and HDMI data projection, to ensure that your day runs without any technical difficulties.

If thestudioleeds sounds like a space you would love to visit or if you would like to find out more about thestudioleeds or any of the other Studio Venues please visit, http://studiovenues.co.uk/ or call the studio events team on 0800 028 6694.