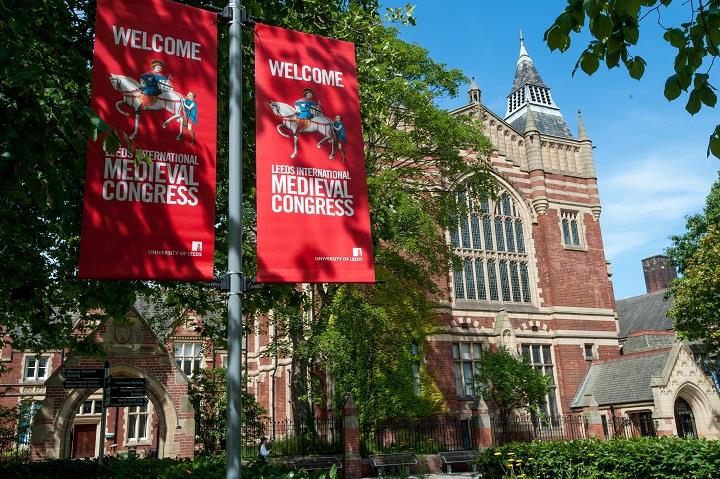 Leeds is about to travel back in time.

For the 26th year, the International Medieval Congress is coming to the University of Leeds – bringing medieval experts together for a series of discussions, demonstrations and debates. The congress also offers the chance for the public to get involved on its final day; where a medieval market serving historically inspired street food, a full medieval craft fair and medieval demonstrations will take place.

The congress is a truly homegrown event which has been increasing in size year on year and is now the largest humanities congress held across the EU, and the largest in medieval studies in the world. Over 2,750 delegates have registered so far from over 66 countries, all to see over 135 exhibitors and take part in an academic programme comprising over 750 sessions across a range of subjects from Art and Architecture through to Theology and Biblical Studies.

Leeds is home to a range of medieval marvels which have been here much longer than the congress, and has more listed buildings than any other city outside of London. Working with the team at the International Medieval Congress, MEETinLEEDS have outlined the top six medieval marvels for you to spot this summer.

1. Visit the West Yorkshire Hoard at Leeds City Museum
Seven amazing Anglo Saxon objects were found in Leeds Metropolitan District by a metal detectorist in 2008/2009, and they are now on display for the public to see at Leeds City Museum. These objects, labeled the Hoard, are made up of gold rings, two of which are of the highest quality from this period, along with a gold brooch fragment, a gold ingot fragment and a lead spindle whorl. The display of the objects shows the Hoard to its best advantage and it is supplemented by new interpretation, including 3D models and a touchscreen, which allows visitors to explore the historical objects up close.

2. Discover The Brotherton Library, University of Leeds
The University’s Library has a range of fascinating medieval manuscripts which span a range of interesting collections, all of which are worth visiting to behold. These are particularly interesting as half of them contain illumination – decoration such as initials, borders, and illustrations – and many are codices (handwritten pages stitched together), which provide a real view into the time period. The largest group of manuscripts visible to the public are from the Brotherton Collection, and these are a worthy sight to see for anyone looking to explore medieval history in Leeds. These include:

In addition, the Brotherton Collection contains a manuscript Universal Chronicle, also known as ‘The History Roll,’ which takes the form of a roll nearly eighteen metres long!

3. Leeds’ Medieval Buildings
With the current amount of investment taking place in Leeds, it could be easy to think of the city as a modern metropolis! However, the city is steeped in history, and some of the oldest buildings in the UK are right here in the area. Many of these sites are truly worth a visit when looking to view everything that represents Leeds’ storied past.

Take Kirkstall Abbey. Built in 1152, Kirkstall Abbey became one of the most important Cistercian abbeys in the country for a time, until the 16th century when Henry VIII put an end to it and closed down all the monasteries in the country. After this, the final abbot converted the old gatehouse into a residence, and then it became a farmhouse. It stayed that way for 300 years before falling under the ownership of Leeds City Council, when it then became a museum.

Calverley Old Hall is also situated in nearby Calverley, and is a property of great historical importance. The building, inhabited by the Lords of the Manor of Calverley from around 1250 to the 18th century, is partly used as a short breaks haven now – but parts of it have fallen into decay and are on the national Heritage At Risk register. It has been under recent restoration, and a great deal of the 17th-century rooms, with fine moulded beams and flagstone floors, have been saved. The Chapel has also been repaired, as has the fine hammerbeam roof of the Great Hall, both of which still contain the remains of the eighteenth-century dwellings which were once there.

A feature of their collection is the Sallet, a helmet of German origin dated from 1490. This piece is rare as it retains its painted decoration, baring a colourful flame design and a chequered pattern in red, white and green. During this period, painting was a cheap way to decorate armour, but this piece is one of only a few examples of the armour still in existence, and it can be seen by taking a trip on the water taxi across to Leeds Dock.

5. Making Leeds Medieval – University of Leeds
As this year’s International Medieval Congress takes place in the city, the next stop on the historical journey will see you immerse yourself in the Middle Ages with an exciting day of medieval-themed entertainment, which will be open to all members of the public on the 4th of July.

The International Medieval Congress will bring a taste of the medieval times to the University of Leeds – offering everybody the chance to watch thrilling combat displays, get up close to birds of prey, and meet people demonstrating medieval crafts and techniques. There will also be a series of fresh, local produce from the medieval inspired Farmers’ Market, and a variety of historically themed live music taking place throughout the day.

There will also be a Medieval Craft Fair, giving you the chance to browse beautiful medieval-inspired handmade items, from books through to textiles and jewellery. You will also be able to learn more about the organisations preserving UK local and national history at the Historical and Archaeological Societies Fair.

6. Towton Battlefield, Towton
The final marvel on the list is in close proximity to the city of Leeds. Here in Towton sits the site of the bloodiest battle that has ever been fought on English soil, the Battle of Towton, which took place on the 29th of March 1461 during the War of the Roses. The battle was a defining one in the struggles between the houses of Lancaster and York in the quest for control of the English throne, and ended with an overwhelming victory for the Yorkists.

Delegates from the International Medieval Congress will be visiting this site an excursion during the congress, but it is also open to the general public. There is a society called the Towton Battlefield Society who maintain a Visitors Information Centre in the grounds of the Crooked Billet pub near Saxton, and the team there display information about the battle and the area, show replica artefacts from the period and will also assist with walks to and from the battlefield for organised groups on request.