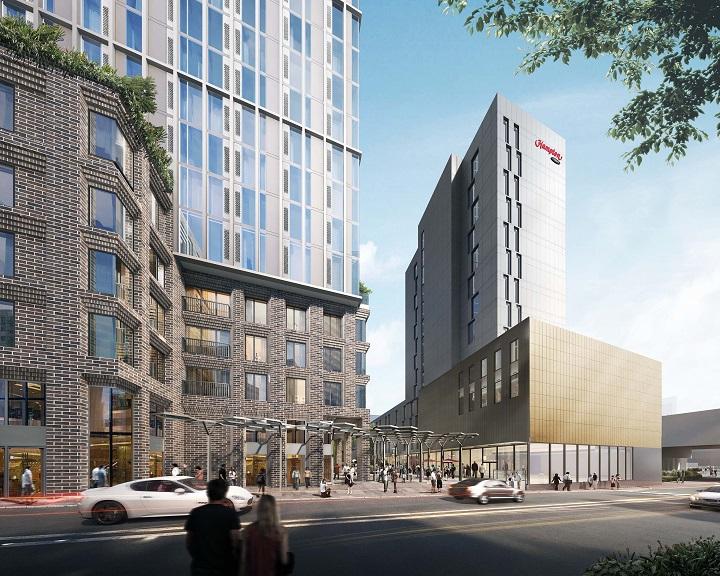 LEEDS, UK and MCLEAN, Va. – 14 March 2017 – Hilton (NYSE: HLT) has signed a franchise agreement for the 14 storey Hampton by Hilton Leeds City Centre in the north-eastern area of the city centre. The 192 guestroom hotel, which is expected to open in late 2019, will be part of the first phase of a new, landmark regeneration project being developed by a consortium of Singapore-listed companies led by Heeton Holdings Ltd. The project will make an impactful contribution in extending the quality of the city centre beyond the inner ring road.

Overall, the scheme will create a sustainable new urban destination on the 2.45 acre Bridge Street site that was once occupied by British Gas prior to their relocation to Holbeck. The scheme is set in an ideal location in the city centre, close to the Victoria Gate shopping centre and emerging creative quarter in the Mabgate district.

Judith Blake, leader of Leeds City Council and executive member for economy and culture, said: “We’re excited to welcome Hampton by Hilton to Leeds. Both leisure and business tourism in the city are growing at a truly impressive rate, with Leeds becoming increasingly recognised as a fantastic destination. This confidence in Leeds has a direct impact on the economic success of the city, making a difference to everyone who lives and works here.”

Patrick Fitzgibbon, senior vice president, development, Hilton said: “The number of Hampton by Hilton hotels in the UK is set to double, with 18 currently trading and a further 22 in the pipeline. An important regional capital, Leeds is at the centre of the North of England’s economy and with the UK Government’s Northern Powerhouse proposals set to boost the regional economy – with investment in HS2 and local businesses – visitor numbers are set to increase considerably in the next five to 10 years. This is a terrific project to be a part of and a great opportunity to expand our fast growing Hampton by Hilton presence in the UK.”

Edwin Liu, country head (UK & Europe) at Heeton Holdings Ltd said: “As the first phase of this wider development, the Hampton by Hilton project marks a significant commencement to the regeneration of this district. We are already witnessing the positive impact to the area from recent developments such as Victoria Gate to the South. We are confident that the hotel will be executed well, and will set the benchmark for the rest of the development.”

Alex Chakabarti, head of hospitality at Heeton Holdings Ltd said: “We are thrilled to partner with Hilton as the franchisor for our hotel in Leeds, a city where the leisure and business sector is going from strength to strength. The hotel is well situated within the city centre and will contribute greatly to the vibrancy of the city as well as the growing hospitality sector in Leeds.”

To find out more about Hampton by Hilton please visit news.hampton.com.