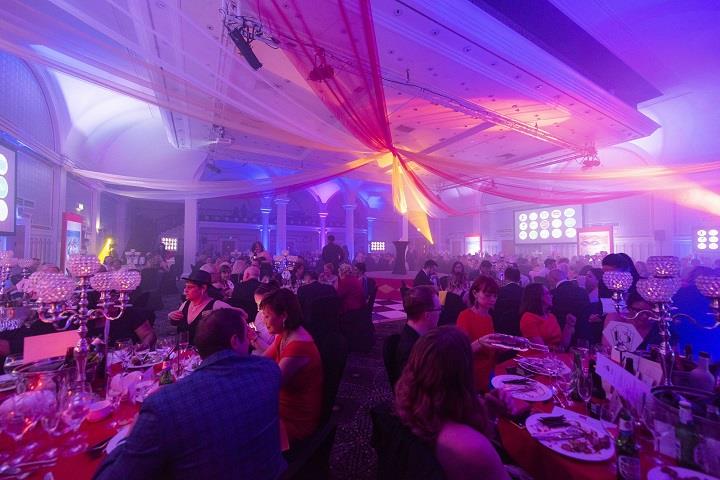 Hosted by BBC Look North’s very own Harry Gration (MBE), the award ceremony celebrated the cream of the crop of the city’s hotel and venue staff. LHVA received headline sponsorship from Leeds BID and gold sponsorship from Trinity Leeds, ensuring the 11th anniversary celebrations were a roaring success.

The Queens’ Ballroom became a circus big top for the night as guests were treated to a Greatest Showman themed celebration, complete with Ringmaster, contortionist and fairground games.

“I am immensely proud to be the Chair of LHVA and have the opportunity to honour the best of the city’s hospitality industry. The Awards is one of the most highly anticipated events of the calendar and this year did not disappoint! We had the highest number of entries ever in our eleventh year of running these awards and the calibre of nominations exceptional. Our judges had a tough job to decide upon the winners, and 300 guests were able to celebrate their achievements at the fabulous awards event. A huge well done to all nominees, and congratulations to all of the winners.”

Paige Larkin by Queens Hotel the first award of the evening, the Apprentice of the Year Award, sponsored by Leeds City College. The judges were impressed with Paige’s commitment and passion for the role.

Sponsored by Team Spirit, the Unsung Hero Award is a chance for those staff members who are often ‘behind the scenes’ to gain recognition. Chris Milner of Oulton Hall was recognised management style and work ethic, inspiring and enthusing his team in his unofficial capacity as ‘agony uncle’.

Awarded for her ability to develop individuals and nurture their talents to help them progress to the next level, Karolina Spedding, Doubletree Leeds took home the coveted Mentor of the Year Award, sponsored by CHS Group UK.

Kevin Lamb from Doubletree Leeds was commended for her exceptional Customer Service Back of House and took the trophy for the Award. Impressed by his level of enthusiasm whatever the job, the judges were delighted to award Kevin with the accolade this year.

A tough category to judge, the Customer Service Front of House Award, sponsored by Trinity Leeds, is always fiercely competitive and highly regarded amongst the hotels and venues. The well-deserved joint winners, Phoebe Ellis, Malmaison and Robyn Murray of Radisson Blu were awarded for their seamless and exceptional customer service and their ‘above and beyond’ mentality.

The People’s Choice was the only award voted for by the public and this year saw more nominations than ever before. Noreen O’Malley of the Queens brought the house down when she went to receive her award and was extremely moved and proud to have been chosen by the public.

The award for Lifetime Achievement, sponsored by Zebra Print Management, acknowledges those staff members who have dedicated their careers to the hospitality industry. Congratulations went to Colin Gaines of the Queens for his 28 years of exceptional service at the hotel.

A passionate and innovative young talent, there was a lot of love in the room for George Young of Dakota Deluxe who took the award for Rising Star, sponsored by Leeds Beckett University, this year. At just 23 years of age and with the mentoring support of his General Manager, the judges were impressed by his determination to become a General Manager in the future.

The Top Team Award, with headline sponsorship from Leeds BID, was certainly one of the most raucously applauded throughout the night, with the Sales & Revenue Team at the Clayton Hotel taking first place. The judges were extremely impressed, not only with the strength and supporting evidence of their award entry, but how they worked as a team showing great positivity and supporting one another during the interview process.

Two titans of the Leeds Hotel Industry were also recognised at the Awards. Gordon Jackson, retired LHVA Chairman was recognised for his Outstanding Contribution to Hospitality. Jim Vincent of the Royal Armouries was recognised by Wayne Topley with the inaugural Chairman’s Choice for his exceptional work in his field and the contribution he has made putting Leeds on the map as a conferencing destination of choice.